A Dog-P bouquet for Jason, because I’m feeling pissy about the love of my life and mother fucker that left us 9 months ago today.

I liken much of the last few months to a lousy day at the beach; crunchy with debris you can’t wipe off, unprepared for changing weather and getting tossed around by waves. Some are big, some small; they knock you down and roll you around but you get up, wipe off and keep strolling along the edge of the tide until the next one knocks you off your feet for a second. That’s not to say there isn’t sunshine and good stuff, because there is, it’s just not always bright enough to cut through the haze.

A few weeks ago, the unexpected sight of his headstone was a riptide. It pulled me back so quick, so powerlessly, I never caught a breath before I was under water. Rolling, tossing, lost in time and space not knowing what is up or down, breathless and weak from battling forces beyond my control. It ripped me back 9 months and it fucking sucks. I didn’t see it coming.

I’m finding a repeat of the first nine months happening, only quicker. Moving through it all again, in days instead of months, nearly 3 weeks have past and I’m not back to the place I was comfortable enough to function well in just a few weeks ago. I am again overly emotional with returning anxiety attacks. And it fucking sucks.

We’re coming up on a new season too, apparently that means new triggers. Like corn. Yes the vegetable, Jason and his damn corn. It was one of his few specialties that he always made his way. Now it’s on display in the store and I see it and suddenly hyperventilate and start crying and feeling sick. It’s fucking CORN! Emotionally charged produce… really? REALLY? Needless to say, I haven’t been shopping much. It really fucking sucks.

This time around, I have more anger. I haven’t really been angry, I suspected because I had been angry for years; abandoned, betrayed and pissed off about it, I went to counseling then to handle it. Now, it’s creeping back; it’s that fucking headstone, it’s his, done and done. And guess what, it fucking sucks.

I am fermenting. Not just over him, but at the systems, the continued loss of more and more people, the memes that tell the suicidal they just need to talk or that tell me I should have listened, acted or done differently because suicide is the problem of the living who don’t help the suffering. You know what, fuck that shit. FUCK THAT SHIT. Just fuck it, because it fucking sucks.

I did everything I could and knew to do and he did everything he could to run from it. But I don’t need to explain that to anyone, I know it in my heart and so did he.

So here’s a Dogwood and Peony bouquet. It smells pretty, despite its name. The dogwood flowers kinda glow like moonlight on the water. Maybe it’ll brighten my day… or it won’t. It’s a process I’m in, high, low and ever shifting like the tides; full of floating garbage I am trying to clean out and life I am trying to preserve. “Life’s a beach” they say, it was just a cute T-shirt until now.

Smoosh Smoosh fucker. You did what you wanted and that fucking sucks. 😢😠☹️ 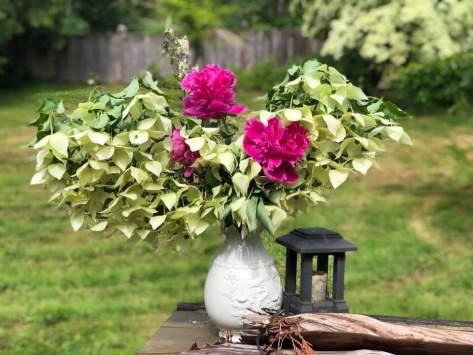 That’s What She Said…